This is yet another way to do concurrency, this time in Swift 5.5 with much cleaner code. First introduced in WWDC 2021, but it won’t be the last we see of it.

Simply declare with the async keyword. It is also common to have throws right after it (so as to throw error instead of returning in the old Result tuple).

It is also common to replace your existing functions with completion handlers by using withCheckedContinuation.

Use await to call async functions

The keyword await indicates there is possible suspension. To be able to suspend execution, only certain part of the code can call it, namely:

Sequentially or in parallel

The beauty is that you can have multiple await calls, and they will run line after line, sequentially.

To run in parallel, use async let. 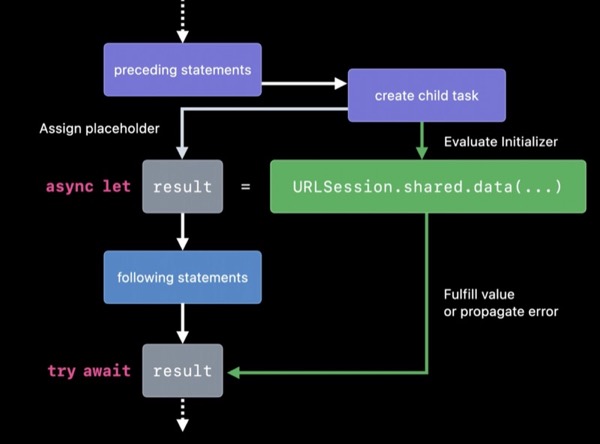 This is for sequence of values arriving over time. Sounds familiar? Yes, the use case is similar to Combine.

You iterate an AsyncSequence as per normal, but with an await.

It is structured because each Task can have child tasks – they have explicit relationships.

You can also detach task, and becomes unstructured.

A TaskGroup can create dynamic number of task. An example from WWDC:

actor is similar to class, except it allows only one task to access the mutable state at a time, which makes it safe for code in multiple tasks.

If you access an actor property from the outside, you need to use await.

A useful global actor wrapper is @MainActor. Declare a func with it, and the func will run on main thread.