Amid the public outcry of Apple being a draconian monopoly, Apple is also clamping down on Internet radio apps.

Epic Games is trolling Apple with a "1984" Fortnite video. It's pretty... epic pic.twitter.com/4a8DJfJa5b

A recent update of my 7-year-old radio streaming app is being rejected, violating Guideline 5.2 on Intellectual Property:

5.2.3 Audio/Video Downloading: Apps should not facilitate illegal file sharing or include the ability to save, convert, or download media from third-party sources (e.g. Apple Music, YouTube, SoundCloud, Vimeo, etc.) without explicit authorization from those sources. Streaming of audio/video content may also violate Terms of Use, so be sure to check before your app accesses those services. Documentation must be provided upon request.

I have appealed, but failed. 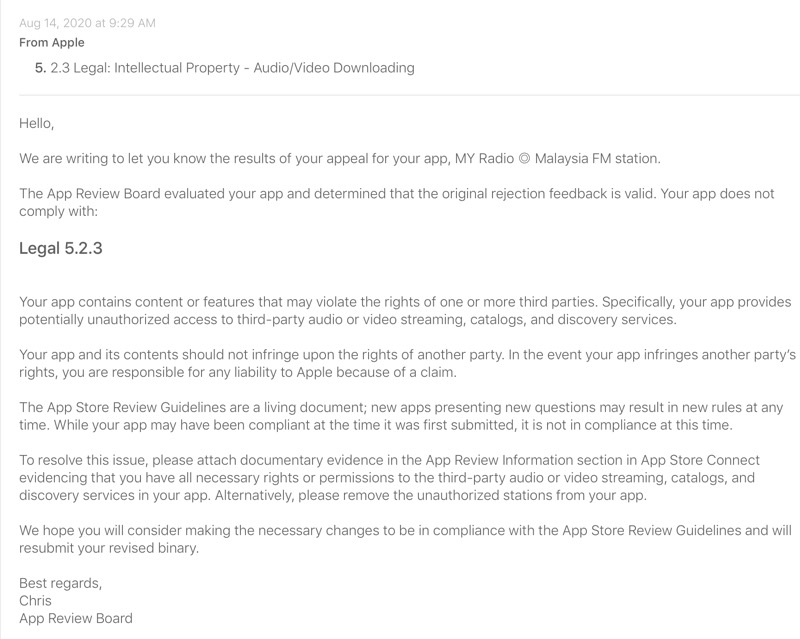 Interestingly, the app reviewer added that their guidelines are a living document, which constantly evolve.

The App Store Review Guidelines are a living document; new apps presenting new questions may result in new rules at any time. While your app may have been compliant at the time it was first submitted, it is not in compliance at this time.

Other radio apps too

Bat Player is being rejected for the same reason. The developer got on a phone call, and the app reviewer said:

I’m sure most of these channels are being run by the same company, so you can get many taken care of by contacting their parent organizations.

😂 There are probably thousands of such organizations, and they won’t want to deal with thousands of app developer requests.

Apple is the police

I don’t know our radio apps infringe on any IP, or not.

But the fact is: Apple takes matters into their own hands.

They remove apps, or limit their features, as and when they desire with their living guidelines.

They always said they review apps for the good of iPhone users, but who knows the real motives. I am wary of Apple. 🤥