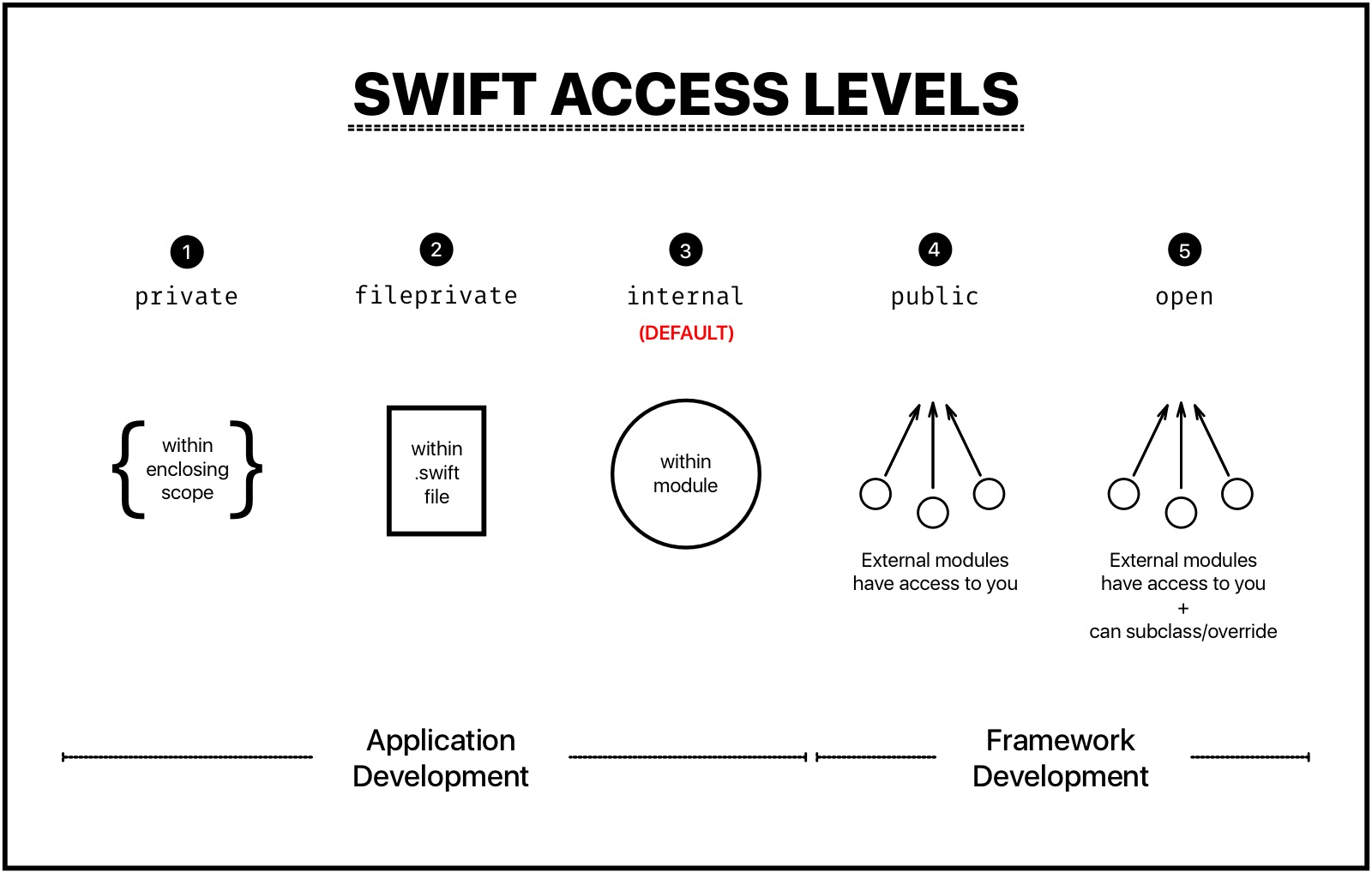 The default is internal, which means access is restricted to within a module.

What is a module? An app is 1 module.

Hence, the default for an app is everything is accessible within the app.

The good practise is to start being extremely restrictive.

Start with private, and expose more, only if necessary.

For regular application development, you will use only (1) to (3).

For developers working on framework/library/SDK, they will use (4) and (5), because their “module” is exposed to other developers. The difference between the last 2 levels is that public does not allow the type/func to be subclassed/overriden, while open let you do whatever you want.

If an access level is omitted, it will be implicitly the default – internal

A good practise is to specify the access level explicitly for the top-level types and functions.

Don’t leave it to the default (internal). Think hard if you need other part of your app to access it.

In your unit tests, you can import with @testable attribute, which is a superpower to change access levels in the module/app, so that in your tests you can access them.

For example, an internal class is not accessible to test target, because a test target is an external module. With @testable, the access level is increased to open, and you can now access it (and may even subclass it)!

Finally, another good practise is to lock down your definitions with final (:

This attribute provides an additional restriction – prevent others from subclassing and overriding it.

Wait. Lastly, it’s hell of a mess from Swift.

This is a complain on how access levels have evolved, yet is still not great in Swift 3.

My biggest gripe is this: I have extension X to a type T, keeping them in separate files. If I want X to use a private member in T, it is impossible to do so with private or fileprivate. I am forced to increase the access to internal, which is not what I want.

There is no way to have type level private. The current private is local scope private, and fileprivate is a weird brother that extends to within that file.

After Swift 3 was introduced, there is proposal SE-0159 to fix the mistake, but was rejected. Clearly the core team acknowledged the shortcoming, but instead of changing the keywords again, they will likely introduce a “Type-based” private access in Swift 4.

Unsurprisingly, Swift 4 improved, with a change:

With just 1 change to private, it improves the situation where we use extensions. But, the same source file restrictions remain. So, if not necessary, don’t create separate file for an extension.

fileprivate remains the same, but now it’s usage can be reduced to rarer cases. Eg. Type A and B are in the same source file, and Type A somehow wants to access a fileprivate of Type B.