The 6th edition of Developer Economics series for Q1 2014 is released today.

There are always great insights to the trend of mobile development as they surveyed with 7,000+ developers.

I am highlighting some salient points for 2014.

Here is the demographic of the 7,000+ developers surveyed: 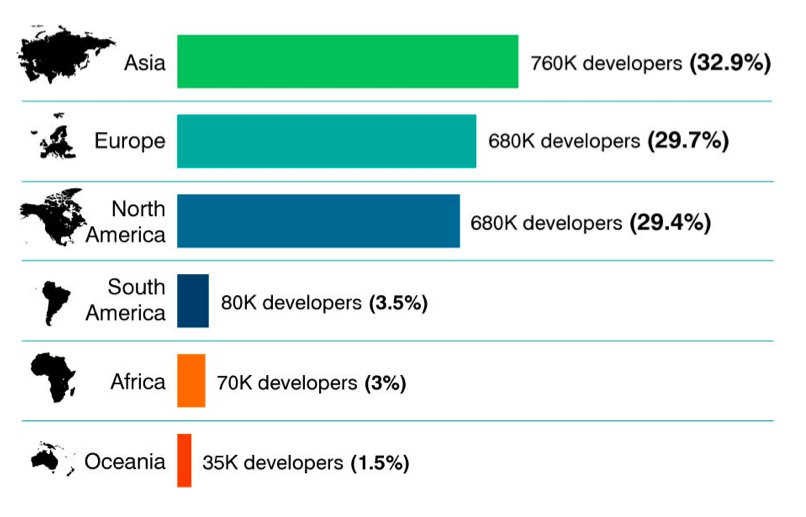 The most popular model is contract development:

Another is in-app advertising:

In-app advertising remains one of most popular revenue models at 26% of app developers, particularly strong on platforms where demand for direct purchases is weak, such as Windows Phone and Android.

60% of developers are below the “app poverty line”, i.e. earn less than $500 per app per month, according to the latest Developer Economics survey.

There is no such thing as an average developer. Developers in the Hunters segment care for revenue, Digital Media Publishers care for reach, Hobbyists care for documentation, Enterprise IT developers care for speed and cost.

There are many types of developers now. Some are directly earning revenue by paid downloads or in-app purchases. Others are indirectly earning by extending their services from web to the mobile.

Some are there for the money eg hacker/hobbyists

Tablets are very much a “companion” development option; tablets attract 83% of app developers but just 12% of developers target tablets as their primary development screen.

Priority is still phone, with tablet providing a complimentary value.

For tablet, iPad is still king. Out of the 12% of developers that solely target tablets:

Millenial Media also released a 2014 report at the same time.

But their insights were much weaker, more biased. They only surveyed 351 developers. For example, they said 90% has advertising, while Developer Economic, who surveyed 7,000+ developers said 26$ has advertising.

Obviously biased, as Millenial Media is a mobile ad network company, and their developers all run ads..

So, read the better report.