If you are an iOS developer, you are probably familiar with the 3 ways to install an app - Run/debug on device, Ad hoc distribution, and App Store distribution.

Adhoc distribution is the most complicated (the other 2 ways are very straight forward). Over the years, the process has also changed.

In the early days (year 2008), the guide to Adhoc distribution was to create a new build configuration called “Adhoc”, in addition to “Debug” and “Release”.

I know why it is necessary back then, but that is not necessary now. But some posts still insisted that.

With Xcode 4.5 (or perhaps earlier), Project Schemes is introduced. It provides more ways you can configure how you “Build”, “Run”, “Test”, “Analyse” and “Archive”. You can change the build configuration to “Debug” or “Release” as you wanted.

You don’t need to touch them.

To distribute Adhoc way, you only need to “Archive”.

Then in Organizer, click on the “Distribute” button, and select “Save for Enterprise or Ad-Hoc Deployment”.

Select the Adhoc provisioning cert (you would need to download from Apple portal, and install to Xcode). 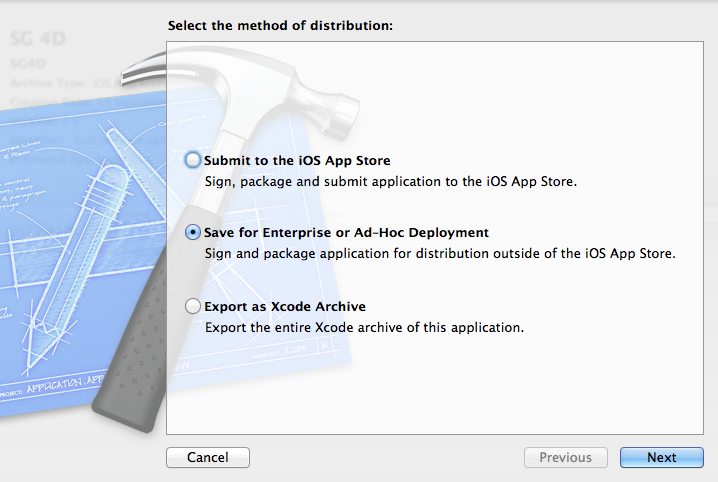 To install, drag to iTunes and sync. That’s it!

Things get slightly more complicated if you are using Apple Push Notifications.

To use push, there are 2 more certs needed for your server to communicate with Apple. One is aps-development, the other is aps-production.

You use aps-development for running on device using “Debug” build configuration.

You use aps-production for both Adhoc and App Store distribution.

Not the other way round. Adhoc distributed apps will NOT get push when you use aps-development.

Because Adhoc distributed apps will register device token to Apple production gateway, while your aps-development communicates with Apple sandbox gateway.

If you want Adhoc distributed apps to get push, you must send the push with aps-production. Adhoc is as good as production app, yet not on the App Store.

Which also means the push must use aps-production.

In the past, you need to create a new build configuration call “Adhoc”. But that is no longer needed as you can select which cert to re-sign after archiving.

I will not cover wireless distribution today (though you may refer to this method using dropbox).

Or you could use TestFlight which is the best in distributing ad hoc builds - with versioning and beta users management!